Rolling Along In My Own Lane 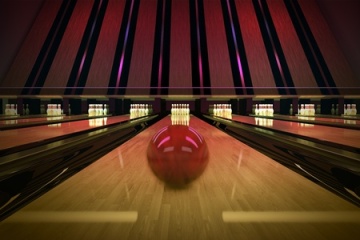 What’s all this stuff I keep reading about bowling alleys?

I’m talking about all the bowling alleys I see included as amenities in a bunch of high-end listings of late. For example, Petra Stunt’s $195 million dollar estate has a bowling alley. (It also has a beauty salon, a gym, a wine tasting room, and massage and tanning rooms. My question is: are all of these rooms  within walking distance to each other, or does one  drive to them in the Formula One cars I like to imagine the racing heiress keeps on hand?)

Many other high-end listings, as well as historic buildings, list bowling alleys as amenities. This begs the question: Who the heck is doing all of this bowling?

The last time I bowled with any consistency was when I was a kid, and that was only on rainy days (which is also when I would usually visit museums). As an adult, most of my bowling experiences have occurred after having a few drinks with a group of friends and someone would say, “Hey, why don’t we go bowling?”

Yes, yes, bowling is good clean family safe entertainment, and different professional bowling tours and tournaments used to get some prime television coverage. There was even what I’ll call a game show of sorts called “Bowling for Dollars.” My grandfather watched it.

But all of that has changed, and bowling has been on the decline since the mid-80s. Sure, it has a resurgence of popularity from time to time (its biggest bump coming with the release of “The Big Lebowski“), but then the surge eventually wanes.

My personal bowling experience, and those of my cohorts, is framed by living in metropolitan NY or Los Angeles. Bowling is much more popular in the Midwest, where they have things like rain and snow, and… well, I’m sure they have other things, I just can’t think of any at the moment. I called my friend who is a successful attorney in Ohio and is on the board of several charitable and arts organizations to ask about his bowling habits.

“My wife and I usually go a few times a month,” though admittedly more often in the winter than in the spring or summer (I’m guessing the harvest keeps him quite busy). He also agreed that my foul-weather hypothesis may be a contributing factor to bowling’s popularity in places that actually have weather (and don’t have readily available cabs or subways).

I asked him if he could, would he have a personal bowling alley in his home. “Yes,” he said, excitedly, then a few moments later, “Wait a second. Does it have a an automatic pin setter and bowl return?” Those were must haves, otherwise he’d rather go to the Bowlero Lanes Fun Center. “Besides, they have really good hamburgers. I’ve tried, but I just can’t make them they way they do at home.”

A few years ago a survey discovered that having a balcony or patio was a big draw for people who were renting or buying condos. The same survey also found that patio use falls precipitously after the first three months of tenancy. Well, I guess you gotta have some place to keep your bicycle (which also gets used a lot for the first three months).

To be fair, Ms. Stunt’s bowling alley was installed by the previous owners, Aaron and Candy Spelling. I’d like to imagine that after a hard day on the set of “Beverly Hills 90210” they would all unwind, gleefully chucking a few frames (while having their personal chef serve up bowling alley style burgers).

But then I can’t help but wonder if there was one night, maybe three months after moving in, when Aaron asked Tori if she wanted to “knock down a few pins,” and she shook her head and went back to listening to her Sony Diskman. I picture Aaron shrugging and walking away, and after a few more demurs, eventually not even wanting to bowl himself…

And I think about that neglected bowling alley, the one they were so excited over when they first put it in.  I guess you gotta have some place to keep your bicycle.